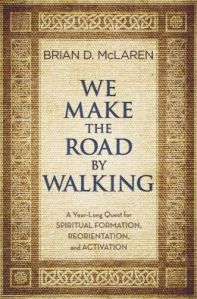 Today I am beginning Brian McLaren’s We Make the Road by Walking: A Year-Long Quest for Spiritual Formation, Reorientation, and Activation (order book). McLaren’s book begins with this:

You are not finished yet. You are “in the making.” You have the capacity to learn, mature, think, change, and grow. You also have the freedom to stagnate, regress, constrict, and lose your way. Which road will you take?   p. xi

I have been a fan of Brian McLaren for a few years, and have read much of what he has authored. More information about Brian can be found here, and a link to the SPAFER lecture presented by Brian McLaren in Birmingham, AL, on September 19-20 is here.

Week 1 – I. Alive in the Story of Creation – Chapter 1: Awe and Wonder

What one thought or idea from today’s lesson especially intrigued, provoked, disturbed, challenged, encouraged, warmed, warned, helped, or surprised you?

Some theologians and mystics speak of the Creator withdrawing or contracting to make space for the universe to be…on its own, so to speak, so that it has its own life, its own being and history. Others imagine God creating the universe within God’s self, so the universe in some way is contained “in” God, within God’s presence, part of God’s own life and story. Still others imagine God creating an ‘out there’ of space and time, and then filling it with galaxies, and then inhabiting it like a song fills a forest or light fills a room or love fills a heart. p. 4

Share a story about a time when you most felt the humble awe and joyful wonder described in this chapter.

“To be alive is to look up at the stars on a dark night and to feel the beyond-words awe of space in its vastness.” p. 5

Like most kids I went through a phase where I wanted to be an astronaut. Space was fascinating. Pluto was still a planet. And I was really excited when we got to make the solar system model from styrofoam balls from the craft store. I remember the excitement around the space shuttle launches. I also remember sitting stunned after watching the Challenger disaster with my classmates. I also remember seeing the 1986 movie Space Camp, in which kids at Space Camp in Huntsville accidentally get sent into space.

My memories of what I thought space was like as a kid was giant blackness with pin points of white light for stars. Space was a world in black and white.

Then in 1990, the Hubble Telescope was put into orbit. After a few years of the jokes related to the telescope being out of focus, in 1993 the really impressive images started being released. All of a sudden space was not a giant empty blackness. Instead of scattered pinpoints of white light, Hubble showed us how full space was. While the photos that were released had been enhanced to better show what was there, the colors and density of space was undeniable.

along the way I got a CD-Rom of Hubble images that could be used as a screen saver. I loaded it up, and would sit and watch as the images scrolled through on my computer screen. Images of stars and galaxies that filled what I once thought was emptiness really blew my mind. It made me feel incredibly small. My favorite of these images were the star incubators. These massive clouds that scientists said that stars were being born.

Now thinking about these images of stars being born, I realize that God’s creation story in Genesis, sung about in the Psalms, isn’t something that is in the past tense. God is still creating. From babies being born, to cheesy 80’s movies, to great works of art, to clouds thousands of light years away from earth that are incubators for stars, creation is.

Click to learn more about the Poor People's Campaign: A National Call for Moral Revival!